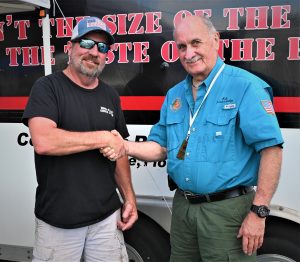 This month I am featuring a fun BBQ team. This team is a family affair and has lots of fun when they participate in competitions. Led by Mark Zondervan his team consists of his wife Tina, and son Travis. As far back as Mark can remember his family has always gathered on Sundays for a special dinner. Not always BBQ but always a special meal that is looked forward to and attended by his family. Mark’s family still gathers on Sundays for that special dinner and gathering, which sometimes will include award winning BBQ.

Travis developed a keen interest in BBQ, particularly competition BBQ, and that led to the formation of their team: Boog-A-Lou Smoke Crew. Travis had a young daughter that everyone adored. Her name was Brooke but everyone called her Boog-A-Lou. They decided if they ever formed a BBQ team it would be named after Brooke. Mark isn’t out to win points or to be on top of any points chase. He does want to know if they can compete with the leaders and score alongside them in the major contests. When they approach the awards stage at a contest, which they seem to do that pretty often, Travis is always out front leading the group.

Tina is the fun team member and is almost always clowning around in the photos. You will see that in most of their award photos, she is having a great time, but so are the other team members. Recently at Apalachicola the organizers would only let one member of the team come to the awards stage. When Boog-A-Lou Smoke Crew got a call Mark went to the stage. Just as the award was given and the cameras were flashing the entire team was in formation for the photos, led by Tina.

As Mark reminisced with me over their start in competition BBQ he recalled, “We entered a contest in Suwanee and did terrible.” He recalls they were last in just about everything. They got their act together, identified what they needed to do to improve, and then competed in Bainbridge, Georgia. They got two calls and finished 12th overall. Infinitely better than their first try at competition BBQ. Jim Elser from Sweet Smoke Q took them under his wing and served as an advisor. He would show them his entries and suggest they come up with similar presentations. Jim still serves as a sponsor today for their team and Mark and Jim are very close friends. In Jim’s own words “OK, I was next to them at their first contest and looking back it didn’t take then long to figure out what it takes to be competitive. Boog-A-Lou Smoke Crew doesn’t compete as much as some of us but when they show up, they’re always in the hunt for a top finish”. 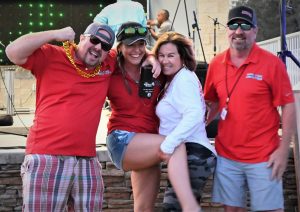 Mark has numerous stories from the contests where he has competed, some I don’t feel I can repeat, and many are just what we hear within this fabulous BBQ family. In a contest in Pensacola several years ago it turned cold and I did not bring warm clothes. Mark did not even know me but he loaned me a jacket for the weekend to keep warm until I was ready to fly home. At the time it was very much appreciated. I have observed him helping others in a similar way through the years.

He recalls they have earned a KCBS Grand, an FBA Grand, and numerous reserve awards through the years. Earlier they were competing in a lot of contests but now they only cook about 10 events a year. They have competed in the American Royal, Sonny’s Showdown, but yet to get the draw for the Jack.

Mark buys his meats from the Butcher Shop in Pensacola. As he made this known more several other teams started buying their meats from the Butcher Shop too. The Butcher Shop is getting so much business he has built a new building just to service the numerous competition BBQ teams. They attribute much of this success to Mark and his association with the BBQ family. Today they actually sponsor Mark’s team. Their other sponsor is Rub Bagby and his one man team, Swamp Boys who has been Team of the Year several times in the FBA and is certainly a leader in competition BBQ. He knows Mark well and recently said “Mark, and the entire Boog-A-Lou Smoke Crew, epitomizes everything that is great about the BBQ community. Mark is so down to earth and genuinely caring and helpful to anyone. He’s passionate about BBQ as well as his great family. If you have not had the chance to meet him yet, do it! You’ll be glad you did.” Everyone has nothing but nice thigs to say about this team and gives them nothing but praise.