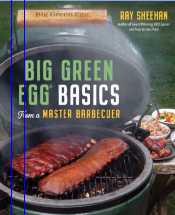 With that in mind, it is books like Sheehan’s that show how easy the BGE can be to produce dishes that will wow those at your table. Sheehan’s book may not be the first with this take but it is the latest and its very well done. He opens with a brief but very useful chapter on getting to know the BGE (loved the “Tools I Can’t Live Without” sidebar) and then plunges right into the recipes. He arranges these uniquely, dividing them by the method of cooking: Hot ‘n’ Fast (Searing, Direct Grilling), Low ‘n’ Slow (Smoking, Barbecue), Slow Fire (Roasting, Indirect Grilling), Baking Savory and Baking Sweet.

The BGE’s versatility lends itself to adding a lot of flare to dishes and Sheehan includes several eye-poppers in the recipes he included. Spicy Jerk Shrimp Cocktail with Cool Island Dipping Sauce, Mexican Roadside Chicken, Smoky BBQ Meat Loaf, Candied Bacon, Sausage Rolls with IPA Mustard BBQ Sauce, and Giant Cinnamon Roll with Bourbon Cream Cheese Frosting, to name a few. A big plus is that every recipe included a full-page, full-color picture of the finished dish.

No matter if you’re considering a first-time purchase of a BGE or if you’ve had one for years, this book will be one from which you will get a lot of ideas and use. Just as it was with his book on barbecue sauces, Sheehan has demonstrated a knack for writing informatively and succinctly. Count this book as another success and I can’t wait to see what’s next. 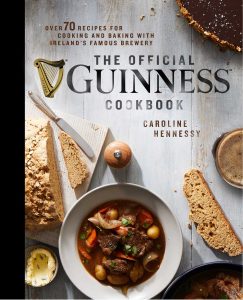 When I bring up Guinness Beer, I realize many folks instantly register the thought “that’s the thick black stuff I drink on St. Patrick’s Day with my corned beef and cabbage dinner”. Guinness is Ireland’s most famous beer and its Dublin brewery dates back to 1759. It is absolutely iconic and at one time was the largest brewery in the world. If you have Irish ties, you’ve likely proudly down a pint.

Guinness Extra Stout is an excellent porter style of beer that other brewers have been trying to replicate for centuries. It’s great for drinking any day of the year but it is also an outstanding ingredient in cooking. There are countless Guinness Irish stew recipes floating around (just Google away and you can find many) but now the Guinness brewery has put its endorsement behind a new book, “The Official Guinness Cookbook: Over 70 Recipes for Cooking and Baking From Ireland’s Famous Brewery” by Caroline Hennessy ($39.99 for the gift set edition that includes a top-quality Guinness-branded apron, Insight Editions, 144 pp.).

I long suspected Guinness could be part of a great barbecue sauce and sure enough, there’s the recipe on page 63. It’s in turn part of the recipe for Sticky Spicy Beer Can Chicken. There’s also a recipe for Guinness hot sauce which is used in another recipe for Stout and Miso-Glazed Salmon.

There’s a lot of fun to be had in the pages of this book with plenty of different combinations to try. Just make sure you don’t drink up too much of the ingredients while you’re cooking!