I have judged and mentored at several Kids’ Ques and it is an eye-opening and fulfilling experience. The talent of the young cooks is something that I would highly recommend all judges take the time to witness for themselves by getting involved. I sat down with the Dobosenski family to learn more about how their three young cooks became involved. You might say there is a natural connection to the sport as parents Stan and Tonia are the pitmasters behind the Rub My Rack competition BBQ team and have has been competing for 6 years. They have earned four Grand Championships and one Reserve Grand Championship. If you know Stan and Tonia, you very likely know their three girls – Zoe (10), Gemma (6) and Maizie (5) — as they are the ones with the ever-present friendly smiles at the Rub My Rack cook site.

Even though I have judged and mentored before, I didn’t realize there are at least 3 different ways a Kid’s Que can be run. The first, and the one I am familiar with, is where the kids cook out in the open on small grills provided for the event. Typically, the parents are separated from the young cooks by a roped off area and mentors are present for safety purposes – and to keep overzealous parents from doing the cooking. In the other two types of contests, the kids cook in an arena (away from any interference) or 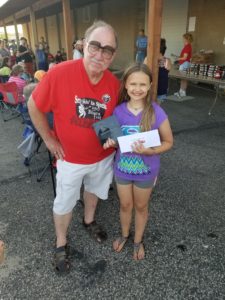 the cooking is done at their main cook site just like they would do at a regular BBQ competition. The young cooks are usually divided into age groups and each age group may, or may not, be given a different protein to cook. In addition to Kid’s Ques, they can compete in many ancillary category contests as well. 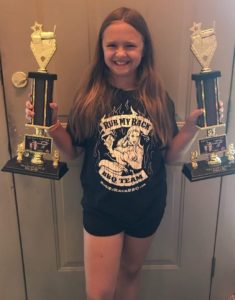 Zoe is currently the most seasoned competitor of the three sisters at this point. She is the one in the family that opens the refrigerator and can figure out something to make – as long as it is something she likes. Her passion is the actual cooking and developing great recipes. Along with her parents and sisters, Zoe has enlisted her grandfather to be a taster for her recipes. Zoe was very successful at the Ribs, Rods and Rockn’ Roll BBQ contest in Vermillion, SD this summer. She placed first in her category and first place overall with her donut burger – a glazed donut bun, grilled pineapple, cheese, bacon and, of course, a secret sauce. Things don’t always work as planned and some real-time improvisation and problem-solving comes into play. Zoe recalled the time she flipped one of her burgers only to have it roll onto the floor. With some words of encouragement from her mentor, she decided to split her remaining burgers so she would have the required number of servings. This type of problem-solving happens all the time when you are cooking whether it is at home or on the competition circuit. Zoe’s calm perseverance paid off with a first-place finish with her bacon jam burger at Owatonna MN’s Smokin’ In Steele Kid’s Que.

Gemma is a little quieter, but she can cook too and does it because it is fun. She has competed in 3 contests so far, and believe it or not, doesn’t like to get a call because of the extra attention it causes. I have a feeling that will change over time. At the Border War BBQ contest in Osawatomie, KS, she planned, prepped and prepared her stuffed pork loin chop at their cook site that she had practiced at home. She was methodical in her approach to cooking and even managed to save a little of her craisin, apple stuffing for herself. She also gave the pork loin chop a little pep talk during the prep to boost its confidence. Although the pep talk didn’t help Gemma win this time, she had a respectable 6th place showing for her efforts. Winning isn’t everything and the Dobosenki’s don’t believe in participation ribbons.

Winning is hard work and events like this are a good place for them to teach the values of their family. Tonia explained that they believe in making them cook their own entries as a matter of both learning and fairness. And, that includes clean-up, but they aren’t quite as successful with that requirement.

This brings us to Maizie. Even at age 5, she is as competitive as her sisters. She was not going to be left on the sidelines. At home, she

was responsible (as all the girls were) to prep everything she needed to bring and to pack her basket for the contest. With limited knife skills, her mom suggested she peel her parsley for her ranch and parsley pork loin chop. Maizie confidently prepped her pork loin chop and then grilled it “hot and fast” on a Weber Smokey Joe. Stan and Tonia insist that all the girls do their own dishes – from the recipe concept to the cook – anything less would be unfair to the other competitors. Cooked to temp, arranged in the box, Maizie confidently presented her entry at the turn in table. It wasn’t Maizie’s day and she took 8th in her division. Was she dissuaded from competing in the future –not a chance!

The Dobosenski family and I believe it is important to have the kids compete on their own – letting them plan, prep and execute the cook as they see fit. I have witnessed many a parent, grandparent or friend providing a constant litany of instructions and commands to the young cooks trying to execute their dish. These comments are probably well-intentioned; they simply put the young cook under a great deal of unnecessary stress and detract from the fun and learning that is occurring. Independent cooking experiences like this will help them grow as cooks and gain confidence in their abilities.

While all the girls are articulate and engaging, Zoe is ready to take it to the next level. While at the Royal this year she competed in the

beans and potato ancillary category taking 15th place. She also sought out and networked with Luke Edgar (VP at Traeger) and John Petryko (Director of TX sales at Traeger) about sponsoring her in 2019. I think they may have found their first Junior Ambassador. Maybe Luke and John should pack up that pink pig smoker they discussed and get shipped to Zoe ASAP. You can follow Zoe on Instagram at Little_Traeger_Girl.

Is competitive cooking in the hearts of these girls? Absolutely. Stan and Tonia recalled that they went camping recently for a short family vacation. As the girls exited the camper they were busy asking where their favorite BBQ teams were and where the cookers are. I think they are hooked and the competitive BBQ circuit is better off for it. You can follow the Dobosenski family on Facebook at Rub My Rack BBQ, on Instagram and at RubMyRackBBQ.com.