If You’re Lookin’ You Ain’t Cookin’

It is a widely accepted shibboleth, appearing in practically every barbecue book ever written: “If you’re lookin’, you ain’t cookin’.” The message is that when you open the lid of your grill or smoker to baste or peak, cooking slows, and each furtive look adds time to the length of the cook, especially long cooks like brisket, ribs, and pork butt. But it’s a myth.

I asked the AmazingRibs.com science advisor Prof. Greg Blonder of Boston University if he could prove or disprove this. Armed with a stopwatch and a thermometer with four probes, he set out to test the theory.

Lookin’ inside a gas grill

So one fine October day, with the ambient air temp in the 70s, Blonder cranked his three burner gas grill to high and after a while it settled in just north of 475°F near the center of the cooking grate about 2-inches above the surface.

Then he opened the lid for one minute. Boom! The air temp dove to about 150°F. When he closed the lid, it climbed almost all the way back in a minute or two. “No harm, no foul” said Blonder.

Then he opened it for five minutes. The temp dove to around 200°F rapidly and stayed there while the lid was up. When he closed the lid it got back up to 400°F pretty quickly but it took almost 10 minutes to level off at more than 450°F and another 10 minutes to get back up to 475°F.

When the lid is opened for only a minute, some of the hot air remains trapped under the lid, the metal in the lid remains hot, and the metal grates on the cooking surface don’t have a chance to cool off. But when it is opened for five minutes, the hot air trapped under the lid bleeds off, the lid gets cool, and the cooking grates drop in temp. Once the metal has cooled off, it takes time to heat it back up. 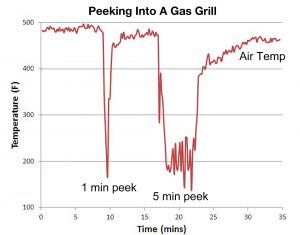 Lookin’ inside a pellet smoker

Then he rolled out his pellet smoker, set it for 200°F and tossed in a five pound pork butt. He set a probe in the center of the meat, another 1/2-inch below the surface, and another about 2-inches above the grate near the meat.

A one minute peek was nearly invisible. But when he opened it for five minutes, the air temp quickly dropped and bottomed out at just over 100°F (the green line in the chart). But most pellet smokers have thermostat control like your indoor oven, “a negative feedback circuit” in physicist speak. As a result it burned more pellets and pushed more air to the fire pot so the recovery was rapid, about 2 minutes, 1/5 the time it took for the gas grill to recover. In fact, it overshot the mark by more than 50°F and then settled into the target temp.

But here’s the most interesting data: The probe placed near the meat’s surface dropped only about 3°F (the blue line), and another probe in the center of the meat (red line) continued to climb pretty steadily despite the cooling of the grill, warmed not by the air, but by heat transferred inward from the warm meat around it. 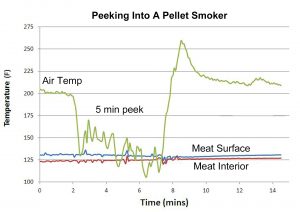 Lookin’ inside a charcoal grill

Finally Blonder took out his trusty and fired it up. With hot coals and a chicken on board, it hit close to 450°F in a hurry. Again he opened the lid for one minute. Boom. Down to 150°F almost instantly. He put the lid back on and the temp recovered in about two minutes to about 400°F.

When he took the lid off for five minutes the temperature bounced back fairly quickly, but never got higher than 350°F, because, even with the lid on, as the coals burn down, the temperature in a charcoal grill slowly declines.

The lesson is that the effect of opening the lid on a charcoal grill like the Weber Kettle is greater than on gas or pellets because the heating potential of charcoal is limited. It eventually diminishes and burns out.

What about the chicken? As with the pork on the pellet grill, the meat responded to the opening of the grill, but only near the sur- face, and only slightly. The center barely blipped.

Blonder repeated his test with a four pound pork butt on a gas grill on a day in February when the air was 18°F and the wind only 10 mph.

Even in winter, peeking for only a minute had practically no impact. The air temp recovered in 2 to 3 minutes, while the meat’s surface only declined 5°F. The interior of the meat didn’t even flinch.

But when he left the lid up for five minutes in a winter wind the grill took 15 to 20 minutes to return to a steady state. But the meat’s surface dropped 20°F, and although the interior did slow down its rise a bit, it continued to cook.

As we might expect, the cold weather made peeking a bit worse than in the summer, but not drastically.

Blonder also tested the recovery in an indoor oven and since he likes busting myths, he tried putting a pizza stone inside to see if the oft repeated theory that it will stabilize temps is true. Same results. Rapid drop in temp when the door is opened, rapid rise when closed. And the pizza stone made little diff.

So is it true that “If you’re lookin’ you ain’t cookin’?” No, it is not true if you open and close quickly and don’t do it often.

That’s because meat is mostly water and fat. A typical average for a pork butt might be about 65% water, 15% fat. Both are great insulators, and a quick peek under the hood isn’t going to drain heat from the meat much more than opening the fridge to take out the milk would warm meat within.

Even with the lid open heat continues to work its way towards the center of the meat by conduction. This is even more true the thicker the meat. The surface of the food may cool momentarily, but the mass of the meat has a lot of thermal energy stored up, especially the longer into the cook you go, and so it keeps on cookin’ regardless of your lookin’.

This, by the way, is the same phenomenon seen when you take a roast or a turkey out of an oven or grill. Called “carryover” the hotter parts of the meat warm the cooler parts in an effort to reach thermal equilibrium. As a result, when you take a piece of meat out of the cooker, the temp in the coolest part of the center can rise as much as 5°F. In this case the meat is still in the cooker, but the hot parts continue to warm the cool parts even though the air in the cooker has dropped to 100°F.

How often is too often to peek? Hard to say, but let’s leave it at this: Don’t peek more than you have to, and if you have to peek make it quick, but if you feel the need to turn your meat, to baste, spritz, sprinkle with fairy dust and make incantations, go for it. And if you have repeated the catchphrase “If you’re lookin’, you ain’t cookin’” it’s time to stop.

Meathead is the barbecue Hall of Famer who founded AmazingRibs.com, by far the world’s most popular outdoor cooking website. He is the author of “Meathead, The Science of Great Barbecue and Grilling” a New York Times Best Seller that was also named one of the “100 Best Cookbooks of All Time” by Southern Living magazine. For 2,000+ free pages of great barbecue and grilling info, visit AmazingRibs.com and take a free trial in the Pitmaster Club.