I Cracked The Window 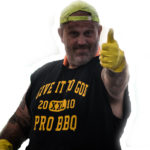 U.S. Army Veteran Jason Janney shares how the simple smell of a barbecue pit helped open his eyes to another world 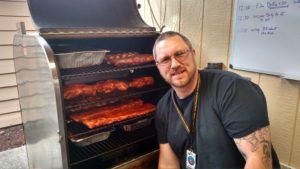 Addiction is a nightmare; it’s desolation to its core, an obsession. My story is dark, dangerous and unfortunately all too common. Even though dark, it’s an example of how a little light can penetrate deeply into the blackness of a defeated and crushed soul and how that little light can turn into grace and expose the love of Jesus Christ.

I was in a self-destructive spiral in a crack head motel in Seattle, WA. It was Christmas time and my 41st birthday in 2017. I had recently lost my job at a transitional shelter for veterans for having to spend too much time in jail on multiple drug-related probation violations. I hated the world, I hated God, I hated everyone and I especially hated myself. I was lost to alcohol, pot, crack, and was playing with heroin and meth. I had gone through almost a couple thousand dollars in crack cocaine and methamphetamine in a week or so. I sold my car for more drugs. I then starting selling all my possessions for whatever high the dope man had available. The rent was due, the notice had been on the door for days. I had to be out of that room in a day or two. At any time the motel manager could have come and demanded that I leave. I thought I had already experienced my darkest time as a child, but the destruction I can cause myself is way more painful than what anyone could do to me. It was the darkest time in my life, my personal tyranny, I was suicidal, I was terrified and too arrogant and proud to know it.

I would spend my days chasing or waiting for dope then retreat to room 110, alone, to get high. I would spend my nights contemplating suicide, making my plan, scratching a knife up and down my arms trying to work up the guts to shove the knife in deep enough to cut my life out. I was working out a plan, the demons in my head were excited to help.

The Ontario Motel is a resident motel. It is located in a shiny red brick building by Boeing field in the industrial south side of Seattle. On the ground floor is a teriyaki and burger joint owned by the same Korean couple that also owned the motel. Adjacent to the motel is a Bar-B-Q place and from time to time, as I would walk from the bus, I could smell the sweet, reminiscent, Bar-B-Q smoking.

Sometimes, I would wake to the smell of stale cigarette, crack, and heroin smoke. I would crack the window and let the night’s torment out. I could hear the planes at Boeing Field and Seatac Airport, I was jealous because they were going somewhere or coming from somewhere way better than where I was. I could hear the hustle and bustle of the industrial area a block away. People would be talking and carrying on with their normal, beautiful, and carefree lives. In my mind, they had great lives with no issues, no torment, and no demons in their heads. I resented them all. I was convinced, I had no one to love, no one loved me, no one cared for me or my personal hell. I was utterly and completely alone except for a persistent crack dealer and my own blackened and dangerous thoughts. 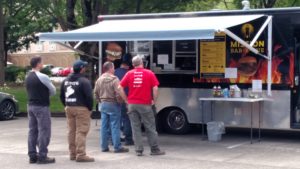 My mind raced in a self-destructing spiral. I was trapped, I had no way out and no one to turn to, I was suffocating. Suicide had been a flirtatious and fleeting thought for years, the idea had always whispered to me. I couldn’t decide if suicide was forgivable by God, but as it became my only thought and escape, I accepted suicide as a forgivable sin. My thoughts and nightmares became more vivid, more dark, more detailed. Reality was largely lived in response to my delusions.

Around 5:00 a.m., while contemplating my suicide and resting in a fictitious peace, I cracked the window to let the stale cigarette and crack smoke out. I would smell the Bar-B-Q smoking from across the street as it overtook the room. Slowly, I would start thinking differently and my mind would get lost in good memories. That smoke reminded me of home in the south, as a boy, watching ol’ men tend grills at the flea market with my dad and ol’ ladies cooking cauldrons of apple butter in the ground. I could hear my doting mother’s flip-flops smacking her feet as she would chase me around the yard. I would think of cow pastures and endless, lazy summer days fishing in small farm ponds, barefooted, with my brother. That Bar-B-Q smell inundated me and released thoughts of teaching my daughter how to make a campfire while grilling in the backyard. It was one of those mornings that I felt the peace and providence of an old friend. God was working on my soul. He was talking to me through a different kind of smoke. God was saving me from myself and all I had to do was crack the window. 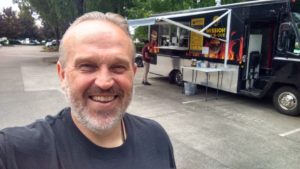 Jeff Petkevicius and the Mission set up

God convicted me with gentleness and kindness through love, He showed me my funeral. There were only two people at my funeral, my mother, and my daughter. They hurt, I felt it. I finally felt something different than anger, confusion, and rejection. I was vulnerable. I felt the pain and hopelessness of another person because of a decision that I had made. They hurt because of me. I crushed their hopes. I had taken myself from their dreams and entered their nightmares. God was talking to me, He got my attention. It was choosing time.

God put a new song in my heart; Ps 40:3 says that: He put a new song in my mouth, a hymn of praise to our God. Many will see and fear the Lord and put their trust in him. I came to the Portland Rescue Mission and the Harbor at the end of January 2018 and I have had no reservations about it. Early on, I knew that Mission BBQ was at the Harbor but I had no idea what BBQ meant to me until early one beautiful May morning. God started in on me early through a statement from my friend, Kyle. He said “Jason did you see outside, did you smell it, did you feel it, it’s wonderful outside.” It was 5:00 a.m. I love nature, whether it be the city or hills, I love the outside. I didn’t think much of it at the time, but those words grew in my mind and kept ringing in my in my ears for the next hour. Kyle’s words slowed me down and opened my eyes to my beautiful surrounding. They were preparing me for a divine appointment. God had something to tell me, an answer to a prayer.

Early that May morning, we started Ole #2, the smoker. I placed some chairs around the pit and Kyle and I sat with Jeff, the Pitmaster, around the billowing pit, talking about God’s wonderful creation. We were listening to the birds chirping and Jeff mentioned how he has a Godly affinity toward birds as do I and God started playing that new song for me. God showed me how he fought for me with the love of Jesus Christ. He showed me how He loved and saved me. He showed me how he had connected Bar-B-Q with peace and love and how He led me to the Harbor. He answered my prayer. He placed me at the Harbor and Mission BBQ to continue working the miracle of transformation through love, relationship, and through a different kind of smoke. 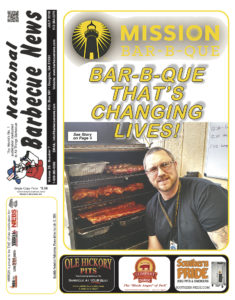 Today, the miracle and the work continue. I love where I am in life right now. Every day God shows me how He provides for all His children and how his providence encompasses everything and everybody no matter who or what you are. I’ve had no thoughts of suicide or of using any substance since I entered this program. I’ve been delivered, that’s a miracle, I AM THAT MIRACLE. I now have amazing relationships with people who love me. I have great adoration for them and love them all. And, I absolutely love that 5 o’clock in the morning, bird chirping hour. Jesus Christ saved me from myself. He spoke to me, He loves me and He loves you too.

Praise God for all those who read His testimony and may the miracle of God’s transforming love touch and change your heart and soul.

FREE BBQ E-News blast!
For Email Marketing you can trust.