In The World Of BBQ, It’s The People You Meet

I am pleased to add my wife, Gretchen, to the by-line of my column – making our column. She has been my partner in writing this column as a co-interviewer, editor and proofreader. Just like in the world of BBQ, your partner helps you make it your passion. Welcome Gretchen! 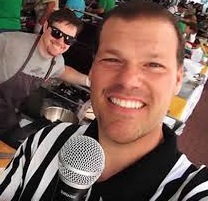 Culinary Fight Club is based in Chicago and was the brainchild of Jiwon McCarthy. For the last six years, a team of twenty employees and countless volunteers has hosted culinary competitions around the United States and the Caribbean. This year there will be 70+ events in 28 states and it is still growing. Twenty percent of the profits from their events go to their charity, Fight2Feed. More on Fight2Feed later. The premise of the Culinary Fight Club is to pit local chefs against each other in a fast-paced, one hour, head to head competition based on a fun food topic. Culinary Fight Club events are officiated by a Cheferee and judged by a panel of local food personalities. Anyone can attend the competitions and tickets are available via the Culinary Fight Club website. It is a great way to spend an evening and the food you get to sample is amazing.

Each competition is based around a specific food topic, such as, Sip + Bite (cocktail paired with a bite of food), Street Food or Blended

Burger (this year, a burger made up of 25% mushrooms). The chefs are allowed to bring three secret ingredients in their original packaging and a standard-sized tote of all the supplies they need to produce their chosen dish. They also have access to the pantry for 45 seconds to grab anything else they might need. The catch is they can only use their aprons to carry their selections back to their workstations. Anything that falls on the floor is considered dead and is unusable. The contents of the pantry are known by the chefs before the event – except for the exact proteins that will be available. As we all know, everything goes better with bacon and it is a staple of the pantry. The chefs have one hour to cook their dish, prepare their presentation plates for the judges and begin preparing up to 100 samples for the audience tastings. After tasting the samples, the audience votes on their favorite for the Taster’s Choice award. There are two winners at each contest – the Taster’s Choice and the overall contest winner chosen by the judges. Why are chef’s lining up to compete? The answer is simple – the thrill and challenge of the competition and bragging rights. Well, there is also a trophy and an invitation to the Best of the Midwest (or other area of the country) and the FightFest Final Plate annual event in Chicago where cash prizes are also awarded.

Chef numbers can vary. Minneapolis had four competitors and Kansas City recently had ten. In Minneapolis, from the BBQ world were Max and Jen Nelson and Craig Stenson. The restaurant world was represented by Desean Hollie and Matt Lepisto. The chefs can be recruited by Culinary Fight Club, come via word of mouth from prior Culinary Fight Club competitors or any interested chef can apply via the their website. The competing chefs also have a role in building the excitement for the event by offering discounted tickets to their friends and colleagues via a special “chefcode” that can use when they purchase their tickets.

The workstations are equipped with two butane burners, sanitation supplies and whatever equipment the cooks brought in their totes. The chefs quickly learned that a butane burner doesn’t get nearly as hot as their commercial stove burners requiring rapid adjustments to their cook plans. The clock never stops counting down. The audience and judges are able to get up close and personal with the chefs. This 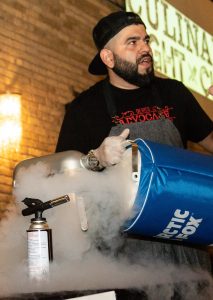 includes asking questions of the chefs while that precious hour ticks away. Just as the chefs were settling into their cook plan, MC Dan McCall threw them the culinary twist for the evening. In this case, a bottle of Sam Adams beer that the chefs were required to include in their final dish. The hour flew by for me as an observer, so I can only imagine how fast it was for the chefs. For the Street Food event I watched, a sample of the secret ingredients the chefs brought (which don’t have to fit into the tote) included huckleberries, brussels sprouts, liquid nitrogen and confidence. With the hour almost gone, chefs rapidly prepared their plates for the judges and rushed them to the center table before time expired. It was very much like running a turn in box to the turn in table at a KCBS event at the last second. In the end, huckleberries won the night and confidence won the taste buds of the attendees.

The judges represent a cross section of local restaurateurs, competition cooks (ie. BBQ teams or prior Culinary Fight Club competitors), local media that covers food or individuals with food or judging experience. The judges are presented each entry with the chef describing their dish to the judges and the audience. Scoring is based on execution, appearance, creativity and taste. Bonus points are awarded to the taster’s choice winner and penalty points could be subtracted for rule violations during the cook. The judging takes place in the open and the judges are asked to comment on each dish as they are formulating their scores. The big winner of the night was Max (Montana Max) and Jen Nelson with their grilled cheese, chicken, bacon and huckleberry jam on a baguette. We we able to sample all four dished and their sandwich was excellent as were all the other entries. Creativity, technique and the fusion skills of the chefs was definitely evident. With the competition complete and the clever trophy awarded, attendees were given the opportunity to support Fight2Feed, the charity mentioned at the beginning of the article. Currently, the charity is most active in Chicago, Atlanta and Kansas City. Their mission is rescuing food from 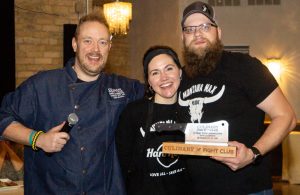 restaurants, chefs and obtaining donations from food distributors (totaling 8,000 to 11,000 pounds each month) and then turning those donations into meals made by Fight2Feed volunteers and chefs. This reduces food waste and allows the food to be shared with over 90,000 hungry friends in need. If you are interested in learning more, donating or volunteering, please visit their website at www.Fight2Feed.org.

What a way to spend an evening with some friends – fun, food, beverages, music in thrilling culinary competition atmosphere. If Culinary Fight Club visits your city or one near you, please take the time to check it out to watch or maybe even compete.

In the world of BBQ … it’s the people you meet … and the friends you make.