If such a trophy existed, do you know of a competition barbecue team, barbecue restaurant or barbecue product that would 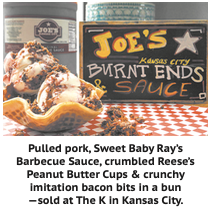 All-time barbecue great John Willingham shared a Bologna Sandwich recipe in his classic John Willingham’s World Champion Bar-B-Q book that would be aSUGAR SHOCK BBQ TROPHY contender if he had smoked the bologna, addedmint chocolate chip ice cream with a sweet barbecue sauce sandwiched between two Moon Pies. John’s original combo of mayo, peanut butter, fresh tomatoes, onion and cheddar cheese is delicious as is, and I hasten to say that sugar was not a hallmark of John’s fantastic barbecue. I doubt that he would have ever seriously developed his bologna sandwich into an ice cream “WHAMwich!”

Hog Wild with Shug? No Way!
I have no argument with those who say that traditional Central Texas barbecue is the gold standard for how real barbecue should look, chew and taste. Central Texas pitmasters are known for outstanding post oak-smoked beef brisket, beef ribs, pork spareribs and sausage seasoned with pepper and salt, no sauce. Back in the day, if you asked for sauce, you could be politely asked to leave and/or be told loud and clear, “Our barbecue is so good it needs no sauce!” Real barbecue needs no sauce was the ironclad principle back then. Not so much nowadays. Kreuz Market in Lockhart may have been the last holdout to serve sauce when they introduced a sauce in 2017 based on a recipe found in a family member’s archives. Texas barbecue sauces vary from one establishment to another—some on the sweet side, some on the sour side, some with a touch of both. 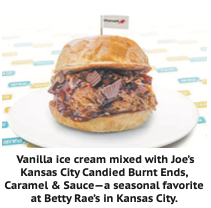 Did Southern ladies bearing sugared cornbread, peach cobbler, pecan pie and sweet tea trigger the Sugar Revolution in barbecue, or was it KC Masterpiece and Sweet Baby Ray’s? Did competition barbecue judges contribute their collective sweet tooth to the revolution?

Maybe it was a perfect storm of stereotypical Southern ladies bearing sweetness, booming sales of sweet barbecue sauces and barbecue judges under the influence of a sweet tooth.

Marketing Note to the Alternative Protein Industry:
Since Sweet Tooth is well-established in humans, you’d best make sure some sweetness is built into your plant-based and lab-grown protein products. It’s as important as heme. Shug will put you years ahead in attracting mainstream mass market consumers.

[Shug, as used here, means sugar, instead of a nickname for an individual such as the late Billy “Shug” Powell of Georgia.]